Is Gibraltar worth visiting?

Is Gibraltar worth visiting?

Often referred to as “The Rock” – Gibraltar is a melting pot of English, Spanish and North African cultures. Expect sunny days all year round, dramatic cliff-sides with monkeys clinging on and a whole range of exciting things to do. All in all, this British Overseas Territory is well worth visiting at any time of year.

Getting to and from Gibraltar Airport

The distance from the airport to the centre is roughly 4 kilometres. A taxi will take around 10 minutes and cost in the region of €10.

For those happy to take public transport, there is also a bus service.

If you’d prefer to hire a car, there are companies based at the airport and we recommend checking out Travel Supermarket’s Car Hire website to find the best deals.

We recommend booking.com for a whole range of accommodation options to suit any budget in Gibraltar. Simply select your preferred dates, number of people and filter your search as per your requirements (sorting by price (low – high) is usually a good starting point).

Other handy filters include only showing properties with free cancellation, and being able to sort your search by proximity to the city centre for instance.

A typical middle-range, 3-star hotel in the city will cost in the region of €80 per night, although this of course varies.

There are many other platforms to consider such as Airbnb.

With Spain on one side and Africa to the other, Gibraltar enjoys great weather.

This Mediterranean climate means warm summers and mild winters with sunny days all year round.

The rainiest month is November, with an average of 140mm falling onto the island.

Hang out with the monkeys

There’s a population of over 200 barbery macaques that live on this 5km long limestone ridge rising above 400m tall.

They’re the only wild monkeys in Europe (pre-Brexit!) and hanging out with them is one of Gibraltar’s most iconic experiences.

Whilst most look friendly at first, be careful as some of them are talented pickpockets!

Speaking of animals in their natural habitat, Gibraltar is also one of the best places in Europe for spotting wild dolphins!

There’s a good chance you’ll spot other creatures like whales and turtles, too.

Although the monkeys probably take them for granted, the views from the peak of the Rock of Gibraltar are something special.

Reachable by cable car, you’ll have great views of both Africa which lies only 13 miles to the south, with Europe stretching out to the north.

A melting pot of cultures, with a British quirk

Although there’s a real mix of English, Spanish and North African cultures, one of Gibraltar’s quirkiest features is that it is predominantly British.

Expect all the usual British high streets, food and pubs but with plenty more sunshine alongside it.

It’s like a slice of Portsmouth has been lifted and carried 500 miles south!

This of course comes with an intriguing history – of which you can find more about here – and we would highly recommend a walking tour for a greater insight once you arrive. 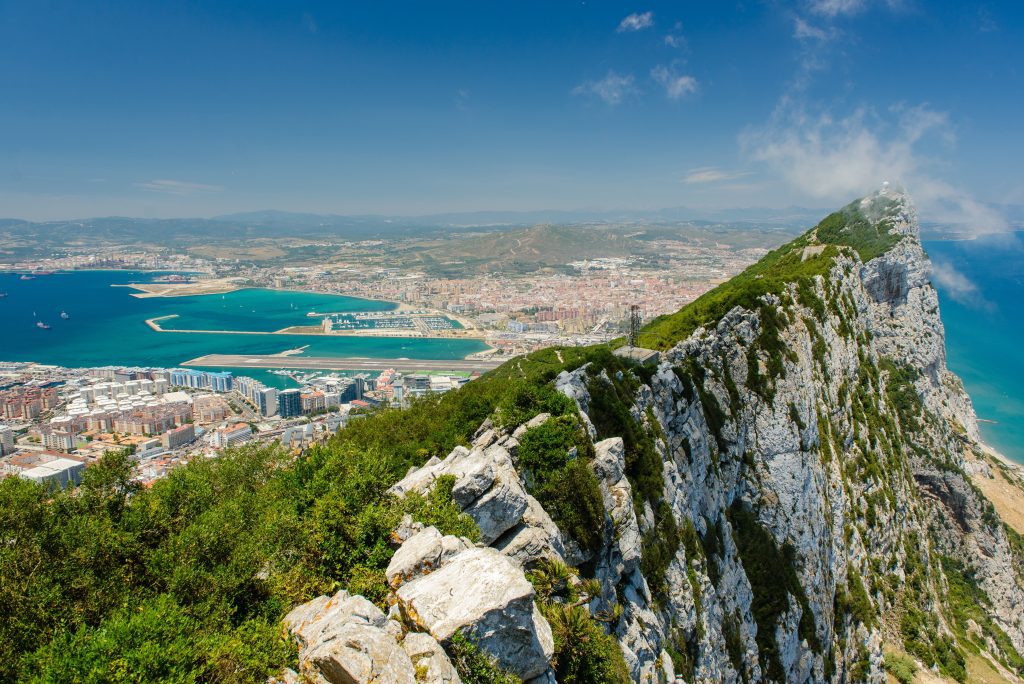 Those travelling from the UK won’t have to bother with any currency exchange for a trip to Gibraltar!

With The Rock being only a few miles long, a great beach is never too far away.

The best spots to consider are the beautiful Eastern Beach, Sandy and Catalan Bay, all with their own unique charm.

Hidden underneath The Rock of Gibraltar however, the cave system is one of the most interesting formations in Europe.

The area is relatively big, and is now used for performances, historical memorials and more!

For those based in the UK, we’re always on the lookout for price drops to Gibraltar among many other short haul destinations from your favourite airports.

if you haven’t already, simply join below and we’ll keep you in the loop!